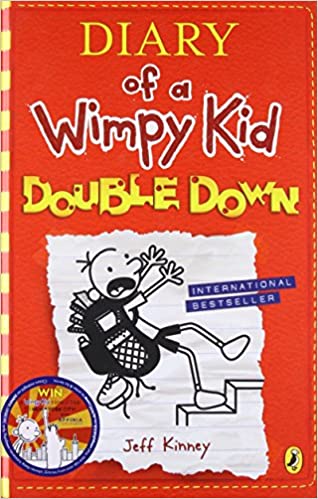 Diary of a Wimpy Kid: Double Down By Jeff Kinney

The latest book in the phenomenally successful Diary of a Wimpy Kid series by bestselling author Jeff Kinney will go on sale on November 1, 2016. One of the most anticipated books of the year, tens of millions of fans all over the world eagerly await this newest installment—the eleventh book in the series. There are now more than 165 million copies of the books in the Diary of a Wimpy Kid series in print globally. Book eleven follows the enormous international acclaim of Old School, which debuted at the top of bestseller lists around the world and has remained at the top of the bestseller lists ever since it went on sale last November. Diary of a Wimpy Kid continues to dominate sales charts in 2016.

The pressure’s really piling up on Greg Heffley. His mom thinks video games are turning his brain to mush, so she wants her son to put down the controller and explore his ‘creative side’.

As if that’s not scary enough, Halloween’s just around the corner and the frights are coming at Greg from every angle.

When Greg discovers a bag of gummy worms, it sparks an idea. Can he get his mom off his back by making a movie . . . and will he become rich and famous in the process? Or will doubling down on this plan just double Greg’s troubles?

Diary of a Wimpy Kid: Double Down PDF

Series: Diary of a Wimpy Kid 11