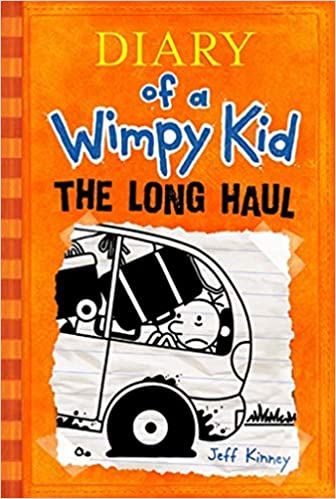 Diary of a Wimpy Kid: The Long Haul By Jeff Kinney

Diary of a Wimpy Kid: The Long Haul is a children’s novel written by Jeff Kinney and is the ninth book in the Diary of a Wimpy Kid series. On April 28, 2014, Kinney announced the book’s name and the color of its cover. The book was released on November 4, 2014 in the USA.

Diary of a Wimpy Kid: The Long Haul revolves around a road trip that the Heffley family embarks on. Usually a family road trip is believed to be amusing… but that is not the case with the Heffleys. Although the journey is quite promising at the beginning, it gradually takes some erroneous twists. Greg never imagined that he will have to face situations and scenarios like Gas Station Bathrooms, wild seagulls, a minor car accident and an escapee pig. However, the most horrible road trips may still turn into an escapade. This is what exactly happened with the Haffley family- a trip which they would not want to forget easily.

The book is narrated in a comical, calm and soothing manner. Although, it seems to be a kids’ novel, adults can easily relate to some circumstances as it is the story about a family as a whole. So, in a way it is a complete family-entertainer.