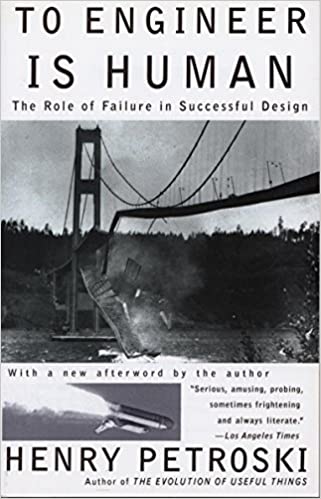 To engineer is human By Henry Petroski

To engineer is human: The Role of Failure in Successful Design is self help book about engineering failures by Henry Petroski, punlished in 1985.

How did a simple design error cause one of the great disasters of the 1980s – the collapse of the walkways at the Kansas City Hyatt Regency Hotel? What made the graceful and innovative Tacoma Narrows Bridge twist apart in a mild wind in 1940? How did an oversized waterlily inspire the magnificent Crystal Palace, the crowning achievement of Victorian architecture and engineering? These are some of the failures and successes that Henry Petroski, author of the acclaimed The Pencil, examines in this engaging, wonderfully literate book. More than a series of fascinating case studies, To Engineer is Human is a work that looks at our deepest notions of progress and perfection, tracing the fine connection between the quantifiable realm of science and the chaotic realities of everyday life.

The moral of this book is that behind every great engineering success is a trail of often ignored (but frequently spectacular) engineering failures. Petroski covers many of the best known examples of well-intentioned but ultimately failed design in action — the galloping Tacoma Narrows Bridge (which you’ve probably seen tossing cars willy-nilly in the famous black-and-white footage), the collapse of the Kansas City Hyatt Regency Hotel walkways — and many lesser known but equally informative examples. The line of reasoning Petroski develops in this book were later formalized into his quasi-Darwinian model of technological evolution in The Evolution of Useful Things, but this book is arguably the more illuminating — and defintely the more enjoyable — of these two titles. Highly recommended.

To Engineer Is Human: The Role of Failure in Successful Design